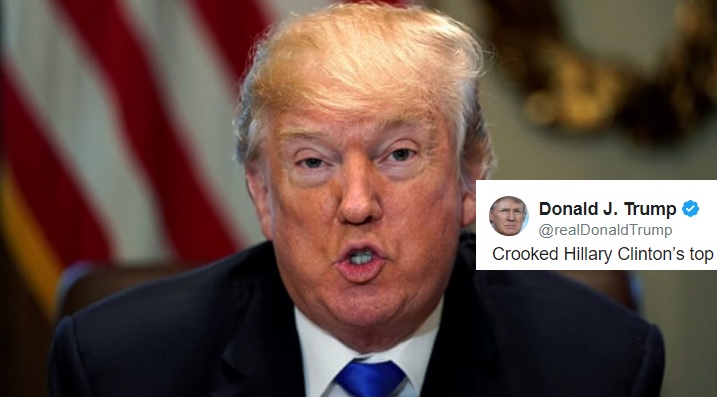 This morning, President Trump took to Twitter with levels of anger and delusion that were stunning to behold, even by his standards.

Trump called for the jailing of Hillary Clinton’s longtime aide Huma Abedin over “disregard for basic security protocols,” which appeared to come from a Daily Caller report that accused Abedin of forwarding sensitive government information to her personal Yahoo email address, which then may or may not have been compromised in a series of two major hacks of Yahoo email servers.

The second part of his tweet refers to US Navy sailor Kristian Saucier, who was sentenced to a year in prison for taking photos of the classified areas of a U.S. nuclear submarine.

It’s clear that Trump and his cronies are intent on dragging out every scrap of information that could possibly be used to distract their base and cultivate the perception of criminality surrounding former Secretary of State Hillary Clinton’s camp, in a desperate and pathetic attempt to move the spotlight off of Special Counsel Mueller’s investigation into the Donald Trump for President campaign.

The hypocrisy, is of course, off the charts at this point. Both Trump’s son-in-law Jared Kushner and his daughter Ivanka, who hold senior White House positions, have been caught using their private emails for government business. Trump himself left Michael Flynn, who he knew was working as a lobbyist for a foreign nation in his position of National Security Advisor for a month after he was warned that Flynn was vulnerable to blackmail.

Trump himself has proven that he can’t be trusted with classified information, seeing as he literally blurted out top-secret intelligence while meeting with the Russian ambassador and held classified national security discussions in front of the guests at his Mar-a-Lago club.

After a week of golfing, the President is busy agonizing over conspiracy theories and stewing about his rivals, rather than joining the rest of us in getting back to work. It is truly distressing to see the ease with which he calls for his political enemies to be jailed for the flimsiest of reasons, demonstrating not only a callous disrespect for the checks and balances in our government and law enforcement agencies but an astounding ignorance of them as well.