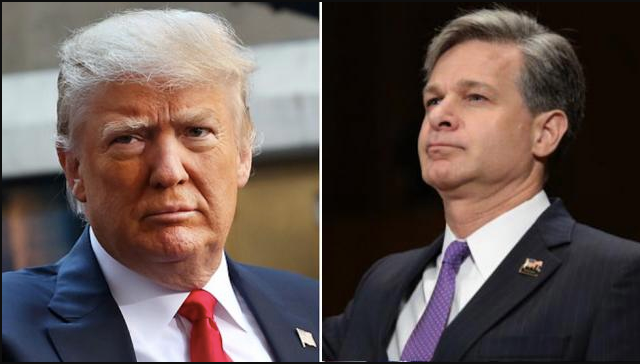 Friends of Christopher Wray — Trump’s appointment to replace fired FBI director James Comey — could soon go the way of his predecessor, as he and his boss reach an impasse over the infamous Nunes memo, today’s Washington Post reports.

‘I’m sure he would love to serve the president and have a good working relationship with him, but he’s going do what he thinks is right . . . He’s not going to care about whether it puts his job in jeopardy.’

Indeed, Wray’s history of standing up to the man who appointed him is reaching a crisis point.

First, when, in a craven attempt to discredit the bureau investigating him, Trump said the FBI’s reputation was in “tatters,” Wray defended the institution he faithfully serves, saying:

Next, when Trump told him to fire deputy FBI director Andrew McCabe — because he could corroborate Comey’s testimony that Trump had asked him for a “loyalty pledge” and to drop the investigation of now-convicted national security advisor Mike Flynn — Wray threatened to resign.
Trump’s pressure appears ultimately to have worked, as McCabe announced his retirement Monday on the heels of leaks that Trump asked the Republican whom he voted for in the 2016 election and told him to ask his wife, former Democratic Virginia State Senate candidate, Jill McCabe, “how it feels to be a loser.”
Trump coordinated with Republican House Intel chair Devin Nunes on a character assassination campaign against FBI leadership, including McCabe, in order to stymie the Russia investigation.
Nunes, a former Trump transition staffer, had said he would recuse himself from the investigation, but has done quite the contrary.

Trump’s most recent demand of slavish allegiance in his obstruction of justice has come in the form of Nunes’ memo, drafted to smear Russia investigators.

Nunes himself does not deny that he collaborated with the White House on its composition, prompting veteran journalist John Heilleman to suggest Nunes might be a Russian agent.

Spurred on by Trump and Speaker Ryan, House Republicans voted to release the memo, despite sharp admonitions from the FBI and Trump’s Department of Justice that doing so would endanger national security, revealing classified intelligence without context and distorting the truth for political gain.

After Trump said on a hot mic at the State of the Union speech last night that his lackey Nunes would “100%” release the memo, the FBI, headed by Wray, released a statement today condemning the Republican smear campaign, saying they had “grave concerns about material omissions of fact that fundamentally impact the memo’s accuracy.”

Suffice it to say, Trump has pushed Wray’s loyalty to what could be the breaking point.

Wray has shown a willingness to consider resigning when the [D]epartment of Justice is under political pressure. When Comey in 2004 was prepared to quit as the deputy attorney general over concerns about reauthorization of a secretive domestic surveillance program, Wray approached him in the hall at the Justice Department and said, ‘Look, I don’t know what’s going on, but before you guys all pull the rip cords, please give me a heads-up so I can jump with you,’ according to an account of the incident in the Washingtonian magazine.

Based on Trump’s pattern of firing or framing anyone who doesn’t pledge “loyalty” in his Russia conspiracy obstruction of justice, Wray may soon be out of a job — or he may simply quit on principle.

Either way, Mueller’s case for obstruction grows stronger by the day.